This week we’re going to talk about the progress we’ve made since last week, flex with a few sexy screens, and talk about what’s next. You may remember this (flexible) roadmap we posted a while back: 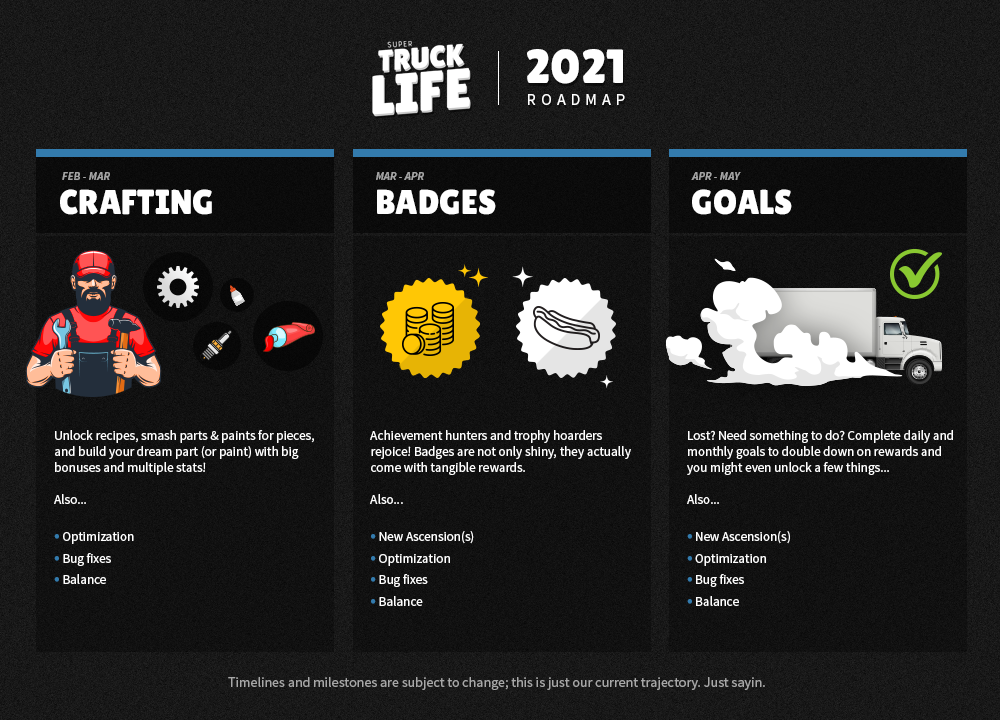 If this is just a distant memory or you don’t even recognize it congratulations because it’s 98% of the reason I still have night terrors. That aside, we are unbelievably on schedule. We released crafting in the target window, and we’re almost into internal testing for Badges. In April! Like it says! In the f*#@ing roadmap I keep referencing!

What a great segue as always, Dan. Thanks Dan. Once we get badges into internal testing we’re going to take our time (this time) and make sure we don’t end up breaking everything. In the meantime, we’ll also be addressing the bugs I mentioned in the last post, including the known issues with Nitro. The multi-effect crafted parts may or may not (they did) have mildly impacted (destroyed) nitro things. Don’t worry, it’s on the list!

I also might have mentioned the Play page getting a bit of an overhaul? Yeah, about that: 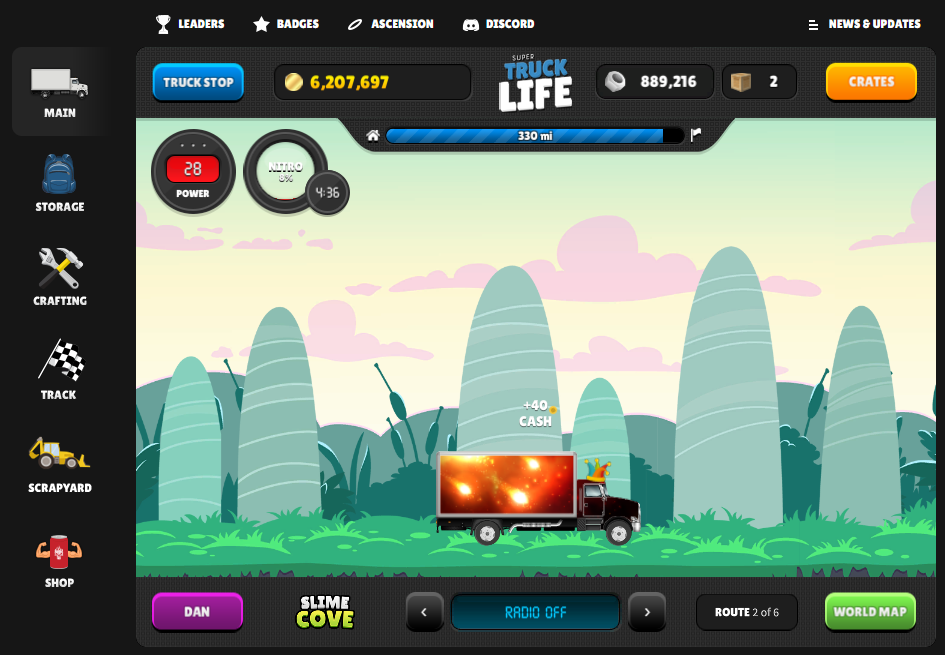 Notice the left nav is a lot less bloated, and a new nav has been introduced above the main panel. The left nav is now dedicated to features/content that require the most interaction. You will likely switch between storage and crafting quite often, for example, and we don’t want the left side to be a convoluted mess (like me). The top nav has been introduced to provide access to information panels such as leaderboards and ascensions, which typically require little to no actual interaction. Interaction: left. Info: top. The information will appear exactly as you expect it to, but this felt a lot more cohesive as we tested: 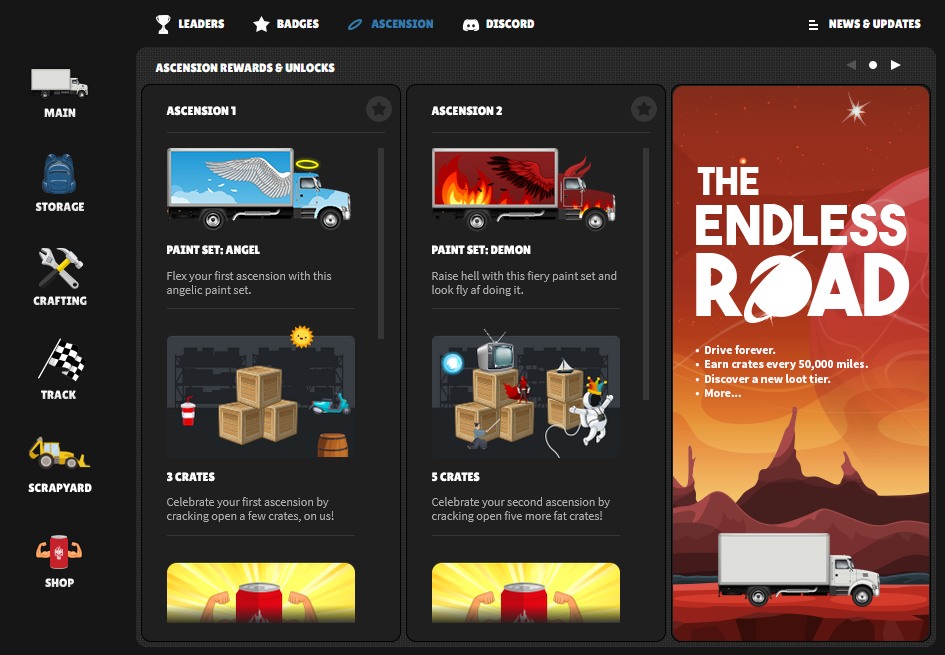 You might have also noticed on the right, we’ve added News & Updates. Instead of constantly being redirected to a blog or asking ya’ll to open a new tab/window, we’ve made reading these stupid updates easier than ever. You can simply click on- wait, how is this possible? 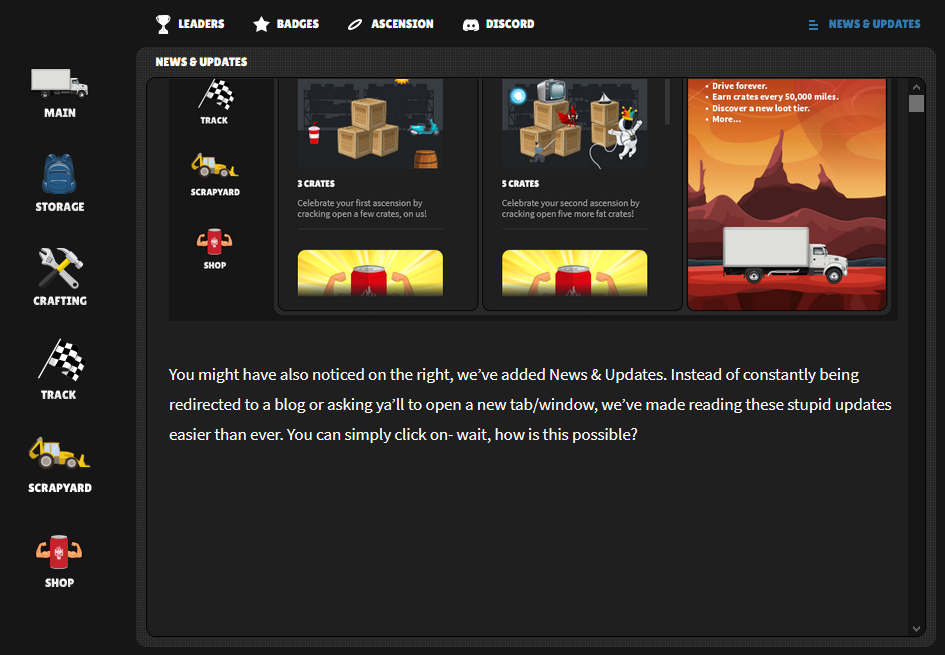 But wait, there’s more! How could there be more you ask? Honestly I don’t know I blacked out halfway through photoshopping that stupid joke, but there is; we’ve started on the layout and logic behind the Goals feature which is next on the list according to some stupid roadmap we forgot about until we realized we were on schedule and then subsequently pretended to be adhering to for the purpose of this post. So convenient.

I’d show you a screenshot but despite my aggressively confident demeanor I’m a sensitive artist terrified you’ll judge me prematurely. Haha, just kidding you idiots, I’m not insecure at all. here’s a sneak preview:

Hope that helps. Talk soon (next week; it’s literally been every week for months).