We hope y’all had a nice Thanksgiving. We hope your holiday was stuffed (get it) with good times, good people, and maybe sneaking off for some Super Truck Life after your aunt did a jell-o shot and yeeted through a closed window right before your parents shut the party down.

But this post isn’t about Thanksgiving or whatever holiday tries to destroy our production cycle. Because this one tried its best and Mike handed its turkey-ass to it. In some weird fever-dream induced spontaneity (I assume), Mike decided to spend 4 of those fun-filled days grinding through code in his pajamas (really) for the greater good: Fleet.

Fleet, as you might know, is a game that it takes me two paragraphs of bullshit to finally talk about. More importantly, it’s also a truck company simulator mini-game with rpg elements that helps you accumulate crates on those longer routes. Also just a heads up, everything I’m about to show you is currently on our staging server and in testing because of that thing I mentioned earlier about Mike and pajamas.

Fleet is divided into two categories: “team” and “hire.” As you might have guessed team is your current fleet and hire is a pool of drivers you can hire to fill your team. You know, like how jobs work. Before I show you the team and hire layouts, try not to read into them too much. I’ll cover specifics in a bit. We crammed a lot of functionality and UI into a very small space so let’s take this in bite-sized portions unlike what you did on Thanksgiving with the Stovetop stuffing when you thought no one was looking… ok that was my last Thanksgiving joke. The team page: 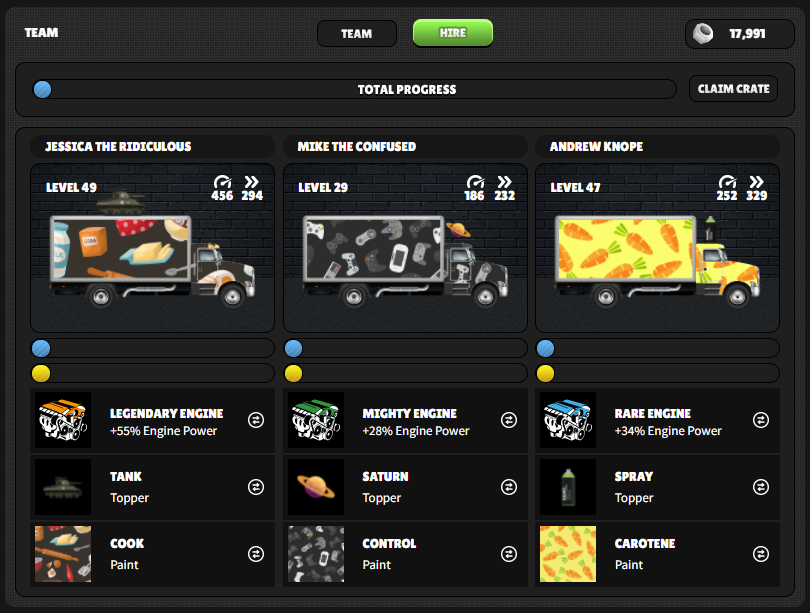 Hopefully the UI isn’t a total disaster considering the time we invested in it and it’s somewhat self-explanatory, but I’ll break it down for y’all. The total progress is the total progress made by your fleet, which includes the contributions by your team members. Obviously the better the team, the faster the bar fills up, so you’ll want a team of champions. You can go about this a few ways.

First, you can improve your current drivers. This can be done by swapping out their engine and/or giving them enough time on the road to gain experience and level up, which increases their base stats. The second is replacing your drivers altogether by hiring new ones, but we’re not ready for that yet.

Let’s talk about Mike the Confused not only because it’s funny but because it just happened to be the random driver name generated in this screenshot. Mike is level 29. You’ll notice two icons. One represents “power”, the other “bonus.” Power determines how fast they move, and bonus determines their reward once they’ve filled up their progress bar. Some drivers will drive damn fast but provide little rewards, while others will slog forever but provide a huge payoff. It’s up to you to decide what drivers fit your playstyle, or maybe you can find one in between. Mike just happens to be a pretty balanced driver. When he drives long enough, he’ll level. Leveling assigns a random stat increase to either Power or Bonus.

Another factor here is Mike’s mighty engine. Not a euphemism. Mike’s engine is overpowered. That was a euphemism. Mike has solid stats but a trash engine, so a great engine could drastically improve his performance. Whatever you decide, it can be done by simply selecting an engine or paint and swapping them out from your inventory, something like this: 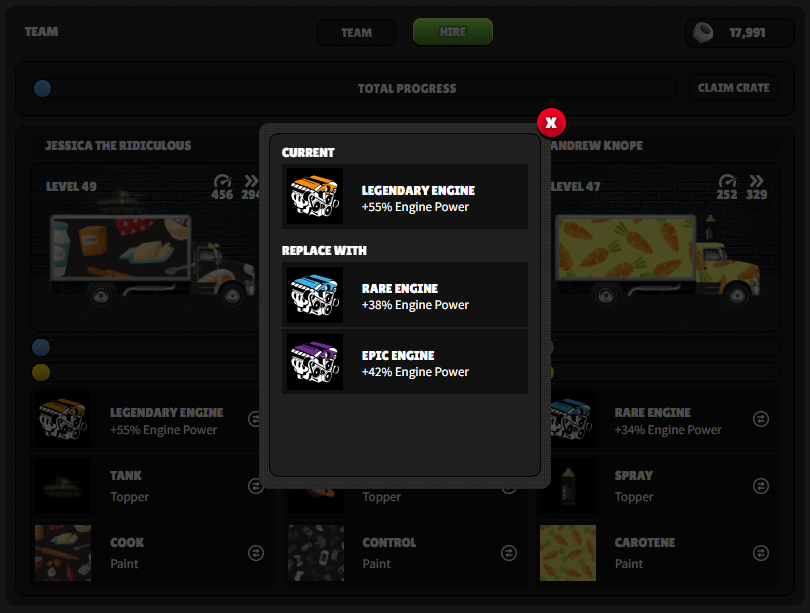 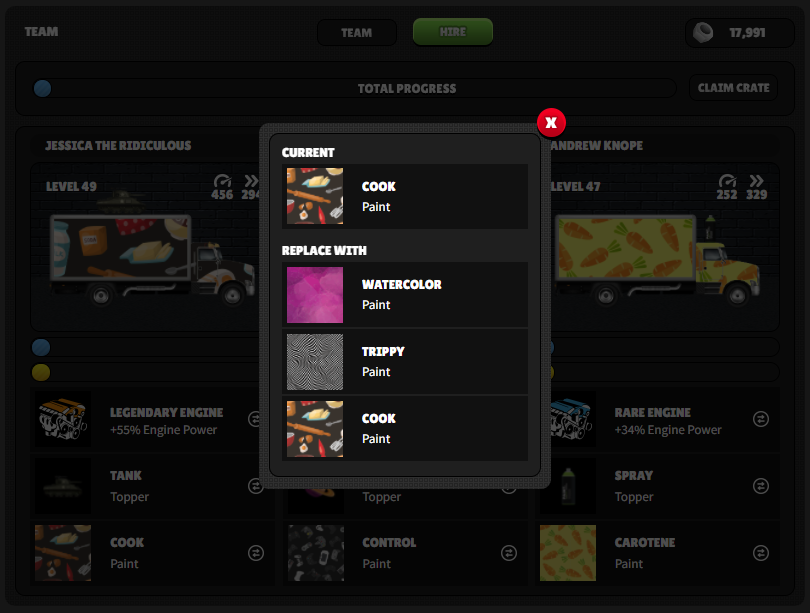 Regardless, in the event that you decide to hire a new driver, you’ll need to head over to team just kidding it’s obviously hire why am I even writing this it writes itself: 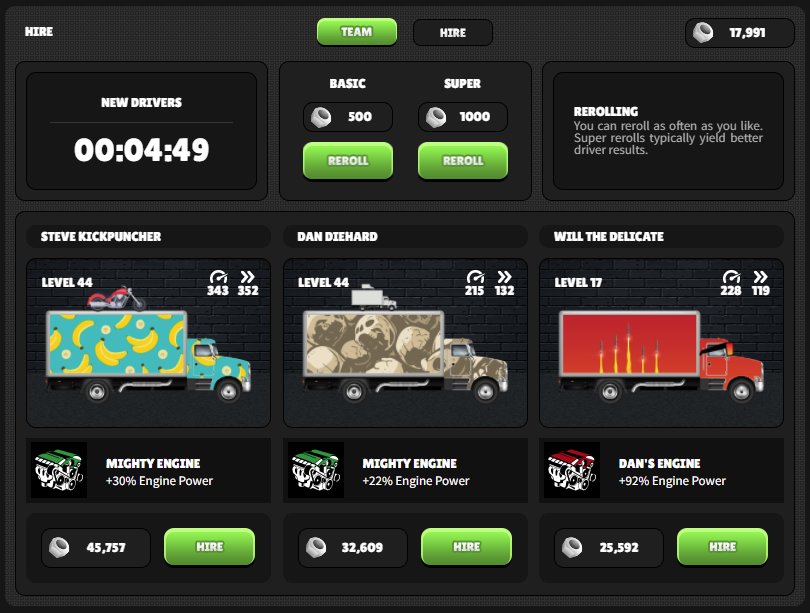 So, there are a few things going on here. Stay with me:

The top section is effectively all about controlling the list on the lower half, which might look very similar because I’m pretty good at consistency in UI design but also because we just talked about that, so let’s move on. You decide you want to hire Dan Diehard because that is the coolest name the generator has ever come up with even though technically we came up with the names so it’s kind of a 50/50 thing I’m doing it again aren’t I… sorry. Anyways if we hire a new truck and we have a full team we’ll have to replace one of our drivers. Hit hire, and here we go: 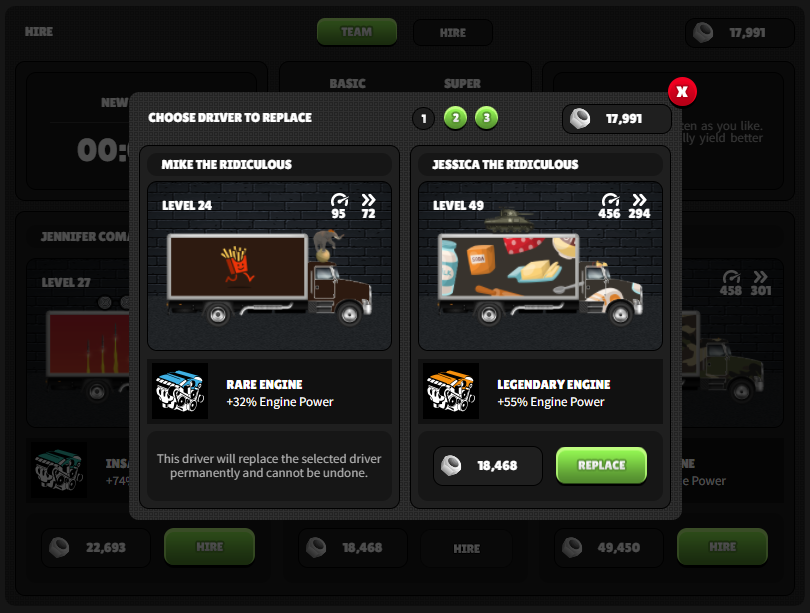 Skadoosh. In this example we’re about to replace Jessica with Mike. The numbers at the top indicate all your drivers. You can flip between all three team members and compare side-by-side with the driver you’re about to hire because nothing pisses me off more in RPGs than the lack of a comparison window between equipment or party members I’m swapping out.

So that’s Fleet, in a nutshell.  Not to blow sunshine up our own butts but we do self-deprecate (I said deprecate) a lot so I feel like we’ve earned this one; Fleet is one of those games that’s going to be very easy and approachable while hiding a deceptive amount of depth and strategy and I’m proud of us. Good job, us. You’ll compare stats, stats against gear, level up truckers and stats, reroll two different ways, calculate progress, and even customize the appearance of your team. Alternatively, you can just stare at bars moving and numbers getting bigger while sipping spiked eggnog which is what I’ll do most of the time whereas Mike likes “numbers” and “logic.”

I had to edit that last sentence because Mike reviewed my post and had this to say:

Mike is arguably cooler than me. Ok, Mike? You’re cool. Let me have this.

We hope you enjoyed this deep dive into Fleet and we’ll keep you posted on progress. There’s still quite a bit more to do but we’ve agreed this is the last mini-game we’ll be launching with because seriously this scope isn’t even a scope anymore it’s Asana on bath salts.