This week we’re going to talk about everyone’s favorite topic; monetization. Sure, we could do a deep dive on FleetTM, the new mini-game from the creators of Super Truck Life from the creators of This Joke Really Got Away from Me but instead we’re going to chat about the recent MTX overhaul we’ve made and why we did it. Don’t worry, the direction we took won’t require any pleas for sympathy/money in this post because the “overhaul” was basically gutting the hell out of the shop.

A few things you’ll need to know going into this (hopefully) brief read:

We started with a shotgun approach.

Without any data to back up our assumptions we landed on “all of the things” or “two idiots that have no idea what they’re doing” if you want to use marketing-industry terminology. To drive traffic, we also added a few “ads” to the rotating carousel and a somewhat predominant nav item on the left. In general this was met with a very positive reception and people felt the approach was sincere and hopefully you’ve read enough posts at this point to know we’ve arrived at the switch portion of the bait and switch; our friends were too nice to tell us we were doing anything wrong, while a handful of redditors straight up called us corporate predators. Awesome. Although if I’m being honest the inclusion of “corporate” there was kind of a compliment because it’s implying we aren’t a couple of dipshits making video games in our spare time and an actual company with bagels in the breakroom and an accounts receivable department.

Anyways the point is it wasn’t received well, but you wouldn’t know that from our sales numbers. That isn’t a humblebrag; it’s empirical evidence that while MTX is typically ignored or chastised in public, you’re getting a lot of that critique from the vocal minority. There’s a reason companies like EA tolerate mostly negative reviews and that reason is the old adage “any press is good press” just kidding it’s money. Reputation might build or break brand loyalty but cash is king. So what’s stopping us from just throwing crate packs all over the store page, intentionally throttling crate income, and generally creating problems with cash solutions? First of all, it isn’t sustainable. It’s a retirement model, not one designed for longevity. Bulldoze your rep long enough and eventually no one will want to be your friend just like high school. I mean for Mike. I was cool as shit in high school. Second, a Ted Talk on morality is basically the opposite of why anyone reads this blog so I’ll summarize; we may be a couple of dipshits but we’re dipshits with morals. We created STL to be a fun, ridiculous experience for everyone. We intentionally decided against paywalls, energy mechanics, and/or a tertiary currency with intentionally confusing exchange rates (7,243 bullshit crystals = $4.19 USD). It’s like baking a cake made out of fat and sugar and then applying frosting but the frosting is actually mayonnaise.

That being said, we still need to pay our bills and build capital for our next game, so we needed to find a balance. This was the result: 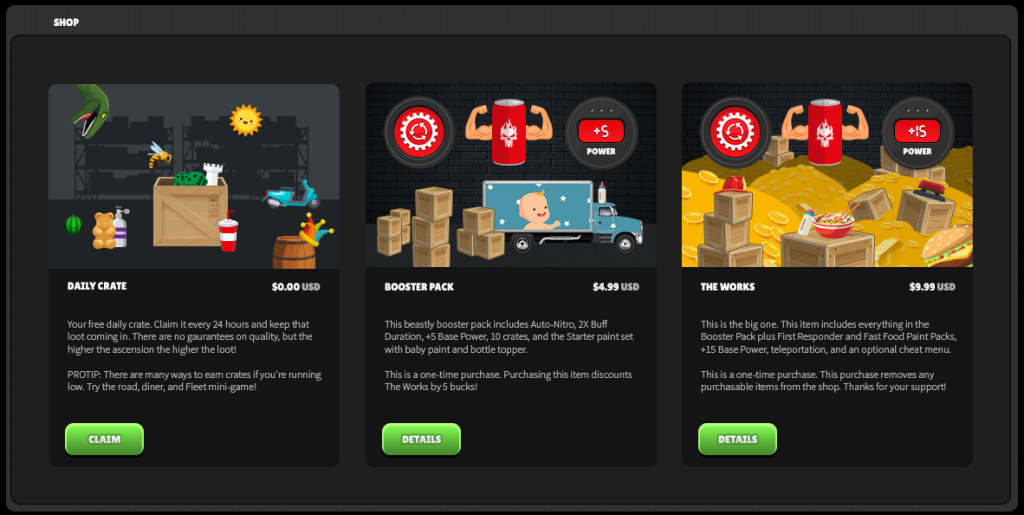 Yeah, that’s the whole shop, and one of them is your free daily crate. To summarize, there are really two things you can purchase in the shop; the booster pack and the works, which is effectively everything including an optional cheat menu to give yourself crates, scrap, cash, and teleport around the game world (or reset your progress). The left nav no longer has a shop icon, and the carousel has been removed altogether in the UI. The only way to access the shop is a small nav item at the top.

To take it a (transparent) step further, these are both one-time purchases. We won’t let you burn your rent money buying crate packs, even if you do something like get drunk and wake up the next day to find you bought every single mount in the WoW shop which I heard happened to someone who isn’t me. On top of that, buying the Works comes with the Booster pack, and buying the Booster pack takes 5 bucks off the Works.

We have plans to release the game on Steam as well, with no microtransactions and a price point of, you guessed it, around $10.

This entire decision was based on a lot of deliberation between us and we both felt really good about the direction we’re taking with this. It might not be the most profitable, but it’s the most “us,” and hopefully our players will appreciate the lack of pressure and the added value if they so choose to support the team while having a lot of fun in the process.