We’ve been going hard on Goals for a few weeks now (hence the Roman numerals), and Goals has been going hard on us. By that I mean we’ve tweaked this #$@%ing feature several times until it finally felt right. Then, we shoved it into production where Mike is taking iteration #47 and bringing it to life. Don’t believe me? Think I’m just insecure about whether or not people believe me? How dare you: 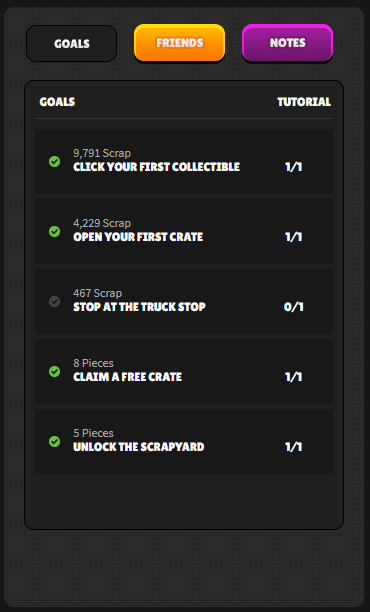 That right there, is the Alpha/Beta/Not Ready version live on our staging server. As you can see, we’ve added a Goals section to the right panel as the third, and final section. This is the default section which serves as both a tutorial for new players, and daily goals for existing players. We’ve already established how things work so I won’t regurgitate that info, but I will say damn son, it feels good. I refused to Photoshop the staging screenshot for the sake of authenticity (seriously though do you not believe me) but I have the final designs in my back pocket which are now in Mike’s pocket but let me put them in your pockets; your face-pockets: 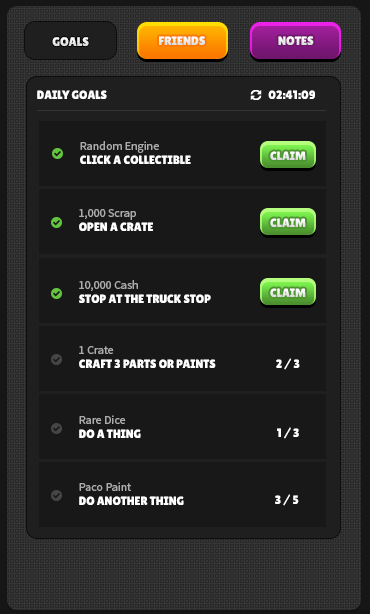 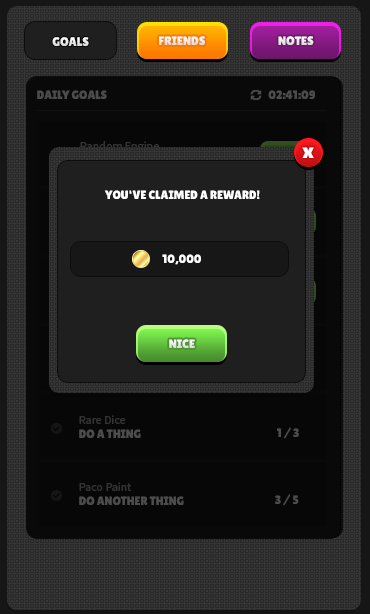 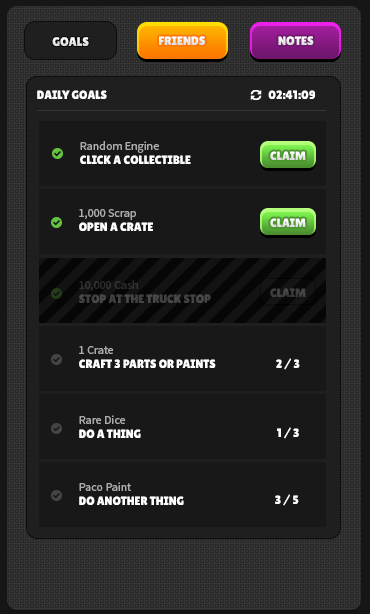 First of all don’t make fun of my tiny buttons. I’m feeling super vulnerable after the whole believe me thing. Anyways, once a goal has been achieved, you’ll get a checkmark and a button. Hit the button, and claim your reward. Get a summary of what you’ve claimed and that goal is removed from the list. Yeah I know, this doesn’t seem that complicated, but that’s exactly the point. The best UX is the UX that seems the most simple and obvious. In case you’re wondering why we’ve added a detailed window when the reward is already listed on the list view, it’s because some rewards are randomized. Take this example, where you have a reward of random pieces:

And there it is. This way when you get a random engine or paint, the reveal will come once you’ve claimed the reward. Get excited!

We’ll keep you posted as we make additional progress, but assuming nothing breaks, we’re on track for a release in the not-too-distant ™ future.

If you’ve forgotten what’s next/simultaneously in progress, feel free to check the previous blog post below.