Today is another day where we talk about things and stuff. Where the $#@k are Goals, you’re probably asking, only instead of asking it’s more like you’re screaming. Great question! A few weeks is the short answer. The long answer is longer, because the short answer probably didn’t really answer your question. Basically Mike is building the entire feature as we (I) speak from the ground up. There’s a tutorial component which is somewhat separate, a Goal refresh (dailies), a randomized pool of actual Goals pulled from, rewards for each Goal, and I’ve dumped multiple mocks in his lap simultaneously because I’m a jerk, etc etc etc. There’s a lot to it, but like we’ve said, it’s our last big feature before we go beyond Open Beta.

Right, so about that last one. Mike talked about it a bit last week.  In that post, he eluded to something we’re pumped to elaborate on now:

Servers/Shards, basically. You’ll be able to select your Zone to accommodate your location (US East, US West, EU, etc) and your truck (character) will live in that Zone. Pretty straight forward, especially if you’ve played World of Warcraft or Final Fantasy XIV. This decision will provide a lot of benefits to both our players and our infrastructure so as much as it pains us to add yet another god damn task to our list, it’s a necessity before we open the floodgates.

Also, Goals went through a few design tweaks you haven’t actually seen. This is the finalized list view which shows complete and incomplete goals indicated by the check marks: 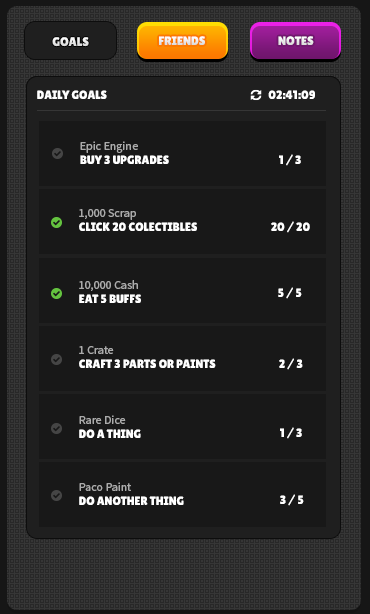 Once you’ve clicked into a completed Goal and claimed the reward, it’ll look like this on the list: 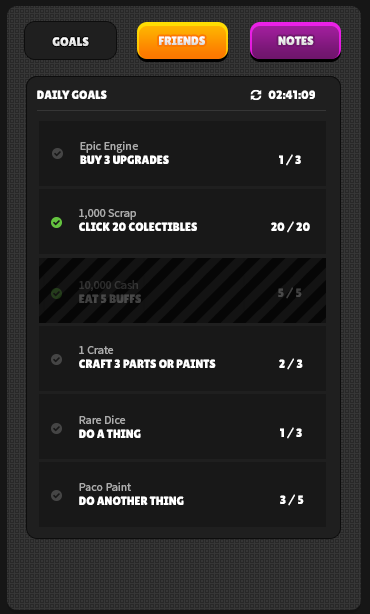 That’s all I’ve got. As much as we’d love to be pushing patches fastly and furiously, we’re in that weird limbo where the things we’re working on are taking some time, so hopefully my terrible brand of comedy and stupid words will suffice.