We’re back, and we’ve been busy bois. In the last week we’ve maintained glorious momentum and knocked out a handful of big ticket items, which is a term I’m using incorrectly to introduce the first item on our list; The New MTX Shop. It’s done. We did it. Also we capped offline progress, got halfway through Ascension unlock functionality, built Autobuffs, debugged the debug menu, and other stuff that I could talk about in vague detail but why do that when we can focus on one thing today? Great question, me.

But first, some trivia. Did you know that the Track was never based on professional racing or NABISCO motorcars or whatever the hell that thing is called where cars go in circles until the people screaming at them are absolutely shitfaced. Ask Mike, that’s his thing. The Track was actually based on horseracing which is a thing I enjoy on occasion. It’s almost like everything we’ve done with this game is the biproduct of a biproduct drenched in weed-scented whiskey. I don’t even know what’s happening at this point.

Anyways, we had initially planned on making the Track a lot more robust with multiplayer elements, leaderboards, driver stats, odds, and other things you’d typically find at your average horse track. Make no mistake, while I just made fun of NASCAR stock car racing, the horse track is the exact same premise except it’s slower because horses. Either way a goofy race track with randomly generated drivers seemed both doable and fun and a great way to win (or lose) scrap. Let’s take a look at the current track: 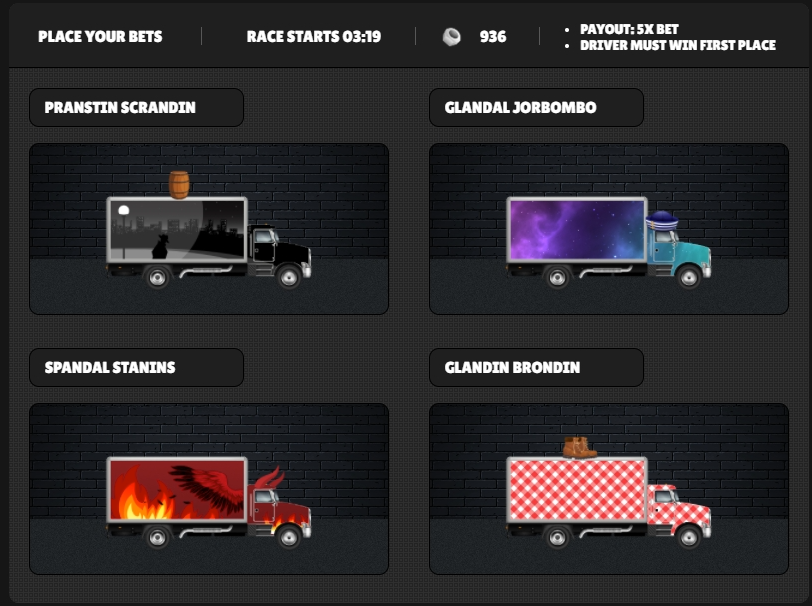 There are two major issues here, and I’m not talking about the aesthetics, although as an artist I’ll always inevitably hate everything I make so yeah also the aesthetics but if you still can’t see it let me subtly highlight it for you:

We genuinely think the Track is fun, but when we initially came up with the payout amount and condition we went with something simple that couldn’t possibly have been a bad idea and Steve Brule’d the randomly generated names because we’re goofy idiots that don’t care if other people don’t get the joke. This is the joke:

For the tragically uninitiated, the Tim & Eric show on Adult Swim featured John C. Reilly as an oblivious dipshit named Steve Brule that butchers pronunciation and basically everything he attempts. Anyways, we ended up with shit like GLANDAL JORBOMBO which still made me laugh just typing that but also most people didn’t get the joke. The other issue is it’s kind of hard to remember a “favorite” driver when every one of them kind of blend together into a mishmash of gibberish or transcribed jazz.

The winning condition made sense at the time because drugs probably but we also weren’t putting together any odds and the driver performance was randomized so we figured an all or nothing payout was fun. The issue there is it isn’t consistent or thematic when it comes to the rest of the game, built heavily on incremental reward systems and dopamine drips and RNG and skinner boxes and I’ve made my point.

Allow me to derail myself for a brief moment and explain something about game design; effort ≠ impact. Just because something took you two weeks to build doesn’t mean it’s good. Star Citizen has been in production since I hit puberty and that game still looks like shit. Yeah that was a cheap jab but I mean what are they going to do about it? Ship the game? Part of this Mega Patch sprint is approaching smaller systems and features and making minor tweaks that make a world of difference. We’re no longer in gameception mode putting games in games (aside from Fleet) and putting a good portion of our time into tuning things like the Track, Scrapyard, Goals, and Crafting; things that could use just a touch of love that makes a world of difference. That’s why we did this: 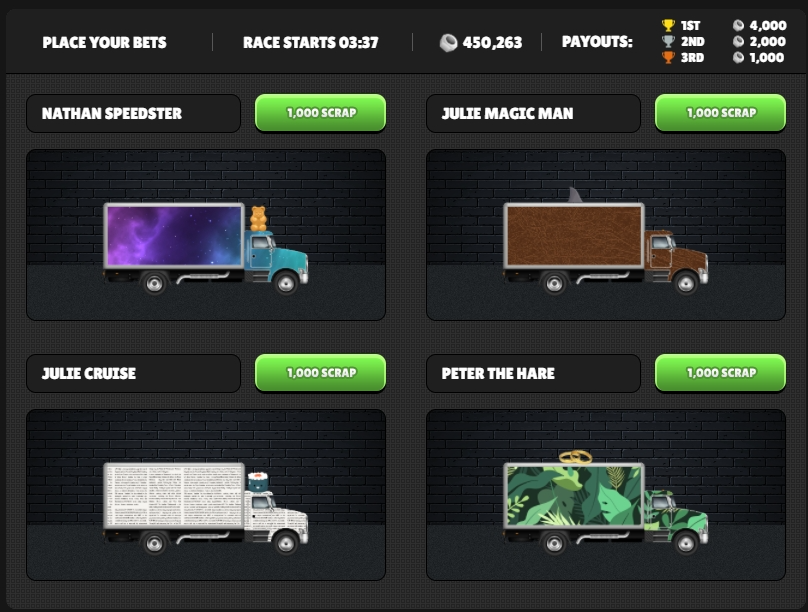 If it isn’t obvious, we split the payouts into three payouts: 1st, 2nd, and 3rd. Side note: in horse racing this is called Win, Place, and Show, respectively, but the conditions are different. For example, betting Win on a horse means the horse must finish first or you get nothing. Place means the horse must come in first or second and the payout is the same either way with the payout being considerably lower than a Win bet. Show just means first, second, or third because of course it does, but it doesn’t help someone would 100% need to explain all of that to you before betting. We didn’t want the payouts to be complicated or pull in a bunch of strategy and a lifetime of dead dreams at the horse track. Instead, we simply broke the payouts into three possibilities that should be straight forward and self explanatory. Back to the theme, you win big in first, double your initial bet in second, and still break even in third. Fourth, well, we’re not just giving scrap away for free guys. That one’s on you.

We also rebuilt the first and last name list so drivers were easy to remember and racing-themed and a lot of them may or may not be references to the best racing movie ever made and by that I mean the only one I can physically sit through without losing my mind.

Next week we’ll either do a deep dive on the new MTX shop or Autobuffs which are fully functional and worth more than a brief mention.