It’s update time 😀 This week we’re going to look at the Roadmap, The Endless Road, and the future of Super Truck Life! Let’s start here: 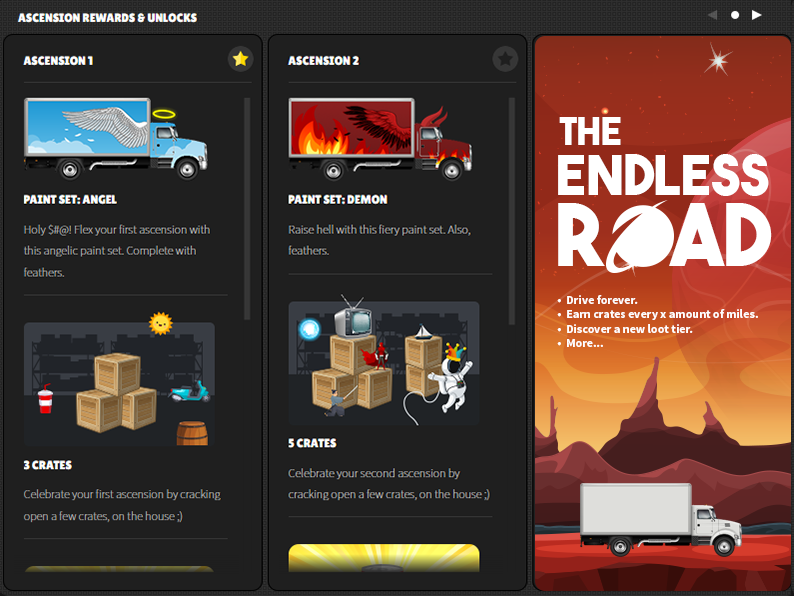 You may have a few questions. Like what the hell am I looking at, for example. Before I get to that, it’s important that yall know a few things about the two man army that is us. First, we don’t have a project manager. We have very expensive and equally neglected project management software. We do not have a dev team. It’s just Mike. We do however have a massive design team except no we don’t; it’s just Dan. “The thing about Mike and Dan,” he said casually in the third person, is that they like to make things. Cool things. Fun things. Things that should probably be measured and budgeted and ultimately kept within a reasonable scope. Instead, they like to make a million things and then a million things more and forget that sometimes you have to function as a real company with real goals and real milestones.

Now you have even more questions.

What I’m saying is we’re extremely passionate about our creations, and we put a lot of blood and sweat and (legal) drugs into these things. And most of the time, we get carried away. That’s why we’ve spent the last several days discussing how STL can grow without spinning wildly out of control. Just like our players, we need a destination. We also need an approachable route that makes sense to our production cycle and is conducive to reasonable expectations. That last sentence was so corporate that anyone reading this is probably pregnant with a pair of pleated khakis.

What you’re seeing above is how we’re going to approach production from here on out. First, you’ll notice that we have indeed locked down ascension rewards, but we’re only sharing the first two for now. Regardless, Ascensions will always reward the player with a minimum of:

We are working on additional rewards for ascensions. These are big, and will likely come every few ascensions. We know exactly what you get at the third ascension, but I’m not going to tell you because it’s a work-in-progress. And while we progress on that, we’re giving players The Endless Road. Here’s a description written by our Marketing Team’s Copywriter (seriously you guys it’s just me, I can’t emphasize this enough):

What is the Endless Road? Simply put:

The Endless Road gives you the option to drive through time and space while we keep adding features, content, and polish to the game!

Hopefully that makes sense. This is how we’re going to move forward. There will be several ascensions. There will be multiple ascension rewards that are bigger and better than a handful of crates. These require functionality, testing, and polish. But we want yall to play and have fun. To explore. To socialize and be rewarded. Now you can be, while we inevitably get carried away and add a million more things behind the scenes.

On a sincere note, we really appreciate all of the feedback, love, patience, and support you’ve shown us since we launched the closed beta not long ago. I can honestly say we’ve effectively rebuilt this entire f#&%ing platform since the launch. Layout, functionality, optimization, feature set, systems, social network, gifting, progression, ascensions, etc. I mean, my dudes we’ve built a functional AI-driven race track for the hell of it. We’ve even built an entire premium shop somewhere in the middle of all of this. And as cliche as it is, there’s no way in hell we’d have done all of that without yall. So thanks.

We know you’re probably still wondering when Mega Ultra Patch is shipping. Now that we’ve built a route and destination that makes sense (finally), we’re damn close. As always, we’ll keep you posted with another update next week!